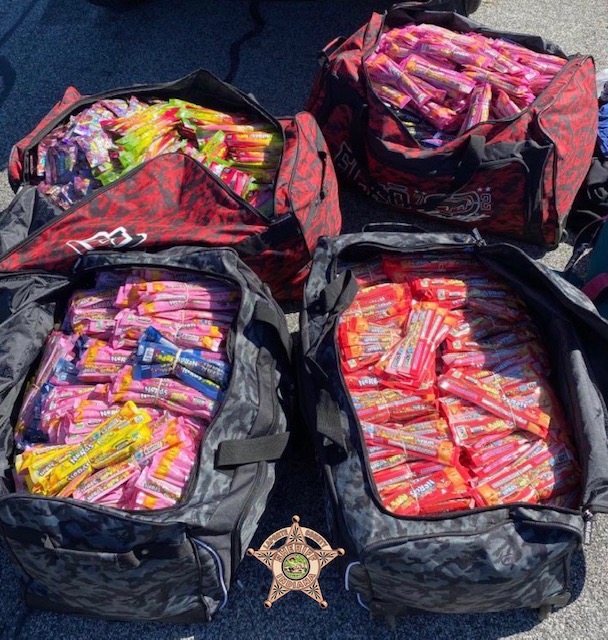 On October 5th, 2020, Deputy Wade Wallace was working the Domestic Highway Enforcement (DHE) program along the Indiana Toll Road (I-80/90) near the 47-mile marker.  At approximately 11:16 AM, he observed a eastbound passenger vehicle approaching him traveling in the passing lane. A radar check revealed the approaching vehicle was exceeding the posted speed limit. As the vehicle passed, Deputy Wallace noticed the vehicle was also following the rear of a semi-tractor trailer too closely.

While traveling eastbound to catch up to the vehicle, Deputy Wallace observed the vehicle suddenly merge from the passing lane to the driving lane at the 48-mile marker.  The vehicle committed a traffic infraction while executing said lane change.

Deputy Wallace initiated a traffic stop on the vehicle at the 49-mile marker.  The driver was identified as Angelo PADILLA Jr. (35 YOA) of Union City, New Jersey.

Deputy Jon Samuelson and K9 Bosco arrived to assist. Bosco was deployed around the exterior of the vehicle for a free-air sniff to which he provided a positive alert. A subsequent search yielded several hundred pounds of THC infused candy based products.  PADILLA was taken into custody and transported to the La Porte County Jail (LCJ).

On October 7th, a formal charge of Dealing in a Controlled Schedule I Substance, a Level 2 Felony, was filed against PADILLA with the assistance of La Porte County Deputy Prosecuting Attorney Atley Price.  On today’s date (10/09/20), PADILLA appeared before Judge Thomas Alevizos in La Porte County Circuit Court for his initial hearing.  PADILLA remains housed in the LCJ and is being held on a $15,000.00 cash-only bond through Circuit Court.