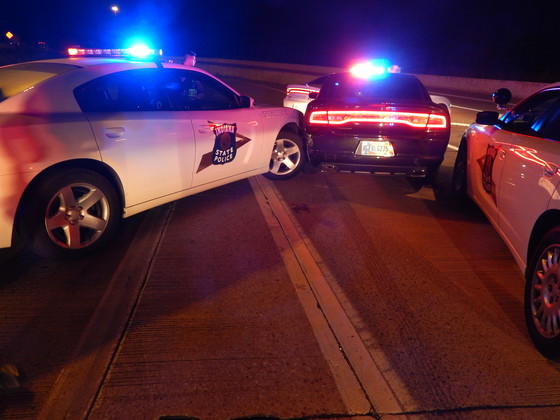 Tuesday night at approximately 10:20 p.m., Troopers were dispatched to a wrong-way driver on I-65 that was traveling southbound in the northbound lanes from the 260 mile-marker, according Sgt. Glen Fifield. Troopers Davidson, Payonk, Grant and Joyner were able to locate the vehicle near the 259 mile-marker driving in reverse on the left shoulder.  The vehicle was a black 2011 Dodge Charger.  As the vehicle was backing up, it was scraping against the concrete barrier wall and the tires were deflated.  Troopers attempted to get the driver to stop, but he continued to drive in reverse from the scene.  The Charger started moving forward again traveling south in the northbound lanes towards the police cars and civilian vehicles.  The troopers then turned their vehicles in an attempt to block the driver from hitting other vehicles head-on.  During this time, Trooper Grant’s vehicle was struck by the black Charger.  Troopers continued in an attempt to block the driver from going towards civilian traffic, but the Charger turned around, avoiding the police cars and started going north in the northbound lanes.  Troopers followed the Charger again and the driver attempted to turn around once more to go the wrong way on the interstate.  Troopers then successfully “boxed the Charger in” to prevent the vehicle from going into oncoming traffic. Trooper Payonk, Trooper Davidson and Trooper Grant’s police cars were then involved in a second collision with the suspect vehicle.  There were no injuries to either the suspect or any of the troopers that were involved in the crashes.  As the suspect was being arrested, a loaded .40 caliber Glock handgun was located under the suspect.  He had been sitting on it as he was driving.

Trooper Davidson detected the strong odor of an alcoholic beverage on the driver’s breath.  The driver was transported to St. Mary’s Hospital for medical clearance as well as for a chemical test for intoxication.  While there, he tested more than three times the legal limit.  The legal limit in Indiana is .08%.  The driver, identified as Paul D. Alvarado, 39, from Highland, IN, was transported to the Lake County Jail.  He is preliminarily charged with the following: