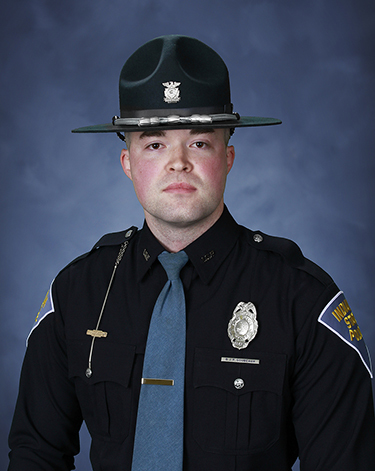 On Friday November 20, 2020 the Indiana State Police held a virtual ceremony honoring 2019 and some 2020 award winners.  Typically, the ceremony is held in the Spring each year, however due to COVID-19 restrictions the event was postponed earlier this year. Superintendent Doug Carter presented awards to Indiana State Police Personnel and other law enforcement officers. Here are The Lowell Post award winning Troopers.

Trooper Andrew Rasala is a six-year State Police veteran and is currently assigned to the Lowell Post All Crimes Policing (ACP) Unit which concentrates on high crime areas as well as interstate interdiction.  In 2019, Trooper Rasala focused on drug enforcement, the results of which led to 966 traffic contacts, 241 criminal charges on 143 people.  68 of those arrests were for felony offenses.  Trooper Rasala is also an F.T.O. (Field Training Officer) where he is able to mentor newer troopers.

Rasala was nominated for this award by his supervisor, Sergeant Aaron Correll who wrote, “Trooper Andrew Rasala personifies what the best of the Indiana State Police should be.  He should be recognized for going above and beyond and is more than deserving of this award.”

Trooper Alaa Hamed was recognized for his outstanding DUI enforcement in 2019.  Trooper Hamed not only led the Lowell Post in DUI arrests, but he led the entire state, arresting 127 DUI defendants, 125 of which were in Lake County, IN.  This recognition is not new for Trooper Hamed.  In his five years with the State Police, he has led his district four times and has been “Top 5” in the state on three occasions.  This is the first time he has been awarded the top DUI Award for the state.  In his brief career, he has arrested 411 defendants for DUI.  Trooper Hamed’s dedication to DUI enforcement has undoubtedly saved lives and made the Hoosier state safer for everyone.

Lieutenant Terry Gose, Commander of the Lowell Post, had this to say about the efforts of these two outstanding troopers, “Troopers Rasala and Hamed exemplify the Indiana State Police.  They are both very hard working and take their commitments to the citizens of Indiana very seriously.”

On September 4, 2019, Troopers from Lowell and Toll Road Districts responded to the area of the 27 mile-marker westbound on the Indiana Toll Road in response to a crash that involved a stolen vehicle. Porter County Sheriff’s Department and Valparaiso Police Department Officers had been in pursuit of the vehicle when it crashed, and the three occupants fled north into a wooded area. Trooper Justin Hansen and his K9 partner Nikan arrived on scene and were assisting with the search while Master Trooper Lawrence McFarrin arrived at the scene of the crash that was blocking westbound traffic. During the search, a Lake County Sheriff’s Department helicopter arrived and was assisting the ground units with locating the suspects when they radioed that one of the suspects was running back toward the Indiana Toll Road, east of the original crash location. The helicopter indicated that the suspect was trying to enter vehicles that were stopped in the traffic backup. Trooper Hansen and Porter County Deputy Alec Kostelnik immediately responded to the Indiana Toll Road from the woods that were north of the incident while M/Trooper McFarrin left the scene of the crash and responded by running east from his location. Before they could arrive, the suspect got into a physical altercation with an Indiana Toll Road maintenance worker and stole his pickup truck and attempted to flee by driving west into the stopped traffic. The suspect struck other vehicles and was not able to drive out of the backup.

Trooper Hansen, M/Trooper McFarrin and Deputy Kostelnik, who were all on foot, converged on the pickup truck to stop the suspect. The suspect then drove the vehicle backwards towards all the officers forcing them to defend themselves against the suspect’s life-threatening actions by discharging their weapons at the suspect in the vehicle. The suspect then attempted to drive west again and crashed into a semi-trailer.  He proceeded to flee on foot and down an embankment to the roadway below where he was quickly apprehended.

Master Trooper McFarrin, Trooper Hansen and Deputy Kostelnik’s actions demonstrated courageous “at risk” performance of duty. These actions and dedication to duty are in keeping with the finest traditions of law enforcement and reflect great credit upon themselves and the Indiana State Police.

Sergeant Dan Leslie and Trooper Brant Goubeaux received a Lifesaving Award for their actions when called upon to deal with a potential suicidal subject.

On April 10, 2019, the Lowell Regional Dispatch Center broadcasted that a person was possibly trying to commit suicide by jumping off the Colfax Street overpass. Trooper Brant Goubeaux and Sergeant Dan Leslie immediately responded and as they approached the scene they observed a black male standing over the edge of the bridge at Burr Street with his back to the interstate and a black female holding onto his head. Realizing that this was the subject they were looking for they quickly drove up the ramp and observed two other people approach the subject and grab his right and left arms to keep him from falling.

Sergeant Leslie got out of his car and immediately hooked his left arm under the subject’s right arm while grabbing his shirt with his right hand. As soon as he grabbed the male subject the male let go of the bridge railing with his hand and his feet fell off the bridge edge. Sergeant Leslie immediately told the group hanging onto the subject to pull him up. Trooper Goubeaux was also able to assist in pulling the male subject up and over the bridge railing.