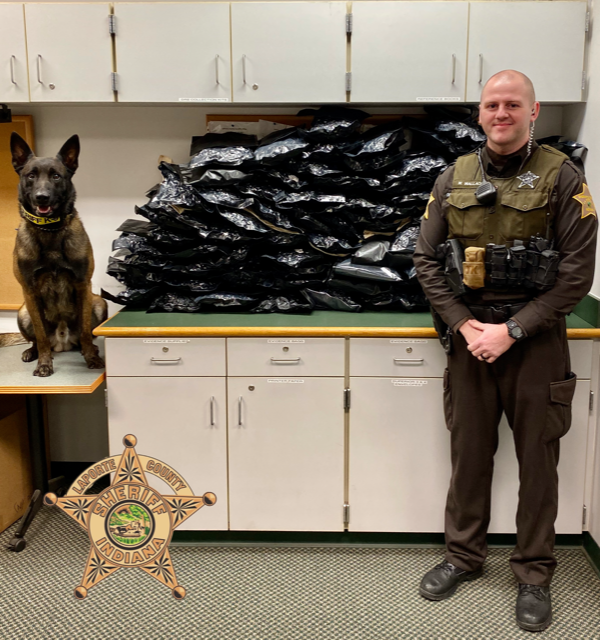 On January 21, 2020, during the late morning, Deputy Wade Wallace was working the Domestic Highway Enforcement (DHE) program along the Indiana Toll Road (I-80/90).  Deputy Wallace was monitoring eastbound traffic at the 52-mile marker.  He observed a passenger vehicle traveling eastbound that gained his attention.  As the vehicle passed, he observed the vehicle committing a traffic infraction.  He began to travel east behind the vehicle and observed another traffic infraction being committed by the same vehicle near the 54.5-mile marker.

Deputy Wallace initiated a traffic stop on the vehicleinside the Knute Rockne Service Area.  The driver was identified as Amanda J. SALMONS (34 YOA) of Cortland, Ohio.   As the traffic stop progressed, a large quantity of an illegal drug was located.

SALMONS was arrested for Dealing in Marijuana (Level 5 Felony).  SALMONS remains housed in the La Porte County Jail (LCJ).  She is being held on a $15,005.00 cash-only bond through La Porte County Superior Court I.

Deputy Jon Samuelson, his K-9 partner Bosco and Deputy Justin Phillips assisted at the scene of the traffic stop.

A short time later, he initiated a traffic stop.  The driver was identified as Tshaka M. BROWN (34 YOA) of Webster, New York.  As the traffic stop progressed, an illegal drug and a firearm was located.

BROWN was arrested for Possession of a Handgun without a License (A-Misdemeanor) and Possession of Marijuana (B-Misdemeanor).  BROWN remains housed in the LCJ.  He is being held on a $1,505.00cash-only bond through Superior Court III.

Deputy Phillips also assisted at the scene of this traffic stop as well.