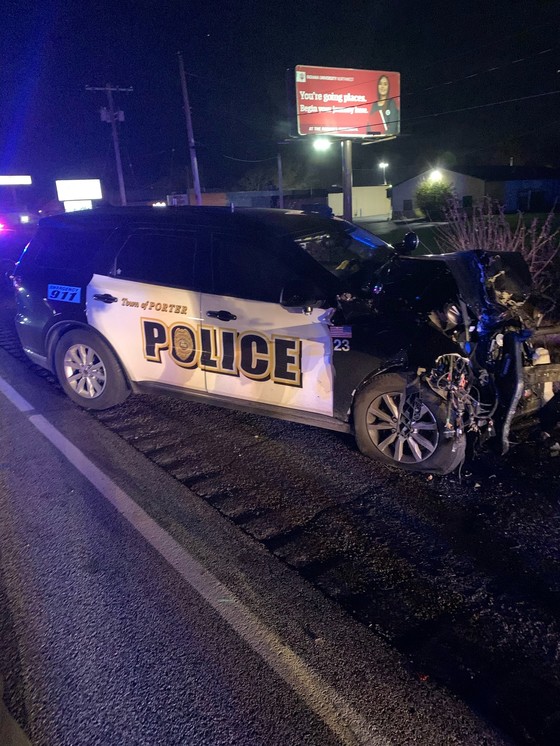 On Saturday evening at 7:00 p.m., the Indiana State Police Regional Dispatch Center received a call from a third party of a kidnapping victim traveling eastbound on I-94 from the Illinois state line. Preliminary investigation shows that information was relayed to troopers that the caller’s daughter was being held against her will and that the offender was armed with a handgun.  At 7:12 p.m., troopers located the suspect vehicle on I-94 near Burns Harbor and attempted to make a felony traffic stop on the vehicle.  Initially, the driver pulled over; however, after stopping, the driver sped away from the stop at a high rate of speed.  Troopers were able to observe several people in the vehicle, one of which appeared to be a female.  As a result of their observations and the caller’s reported information, a pursuit was initiated.

The pursuit continued eastbound on I-94 and exited at S.R. 49 and went southbound.  The driver turned right on 1050 N., north on Calumet and east on 1100 N.  When the driver approached S.R. 49, he turned left, driving northbound in the southbound lanes.  Three Porter Police Officers were driving southbound in the southbound lanes, with their emergency lighting activated, when they observed the vehicle driving directly towards them at a high rate of speed.  Two of the police cars were able to avoid the suspect vehicle.  The third police car, a 2021 Dodge Durango, was struck head-on by the fleeing vehicle.  This impact caused the police car to rotate and come to a rest facing northbound.  The suspect vehicle came to a rest in the west ditch.  Two occupants immediately exited the vehicle and fled west towards Calumet Ave.  Troopers arrived and observed a subject running from the car and called out a foot pursuit.  During that foot chase, one of the suspects was tased and taken into custody at the Phillips 66 gas station.  The second suspect, who was reported to be a white male wearing all black clothing, remains at large as of Saturday night.  A handgun was recovered during the investigation. The suspect that was taken into custody has been identified as Aries E. Atlas, 25, from Kalamazoo, MI. and is incarcerated at the Porter County Jail.  Mr. Atlas is being held on a “Probable Cause Hold” pending formal charges by the Porter County Prosecutor’s Office.

Update – Sunday morning, the Chesterton Police Department received a call of a suspicious male asking to use a phone at the Phillips 66 gas station on Calumet Ave.  Officers responded and located the individual.  The suspect yelled a profanity at the officers and ran.  However, officers quickly chased him down and took him into custody.  The suspect has been identified as Samuel A. Kuhl, 29, from Kalamazoo, MI.  He is wanted on two separate full extradition warrants in Kalamazoo, Michigan for “Weapons Possession by a Felon” charges.  He is currently being held at the Porter County Jail.  Formal charges will be filed by the Indiana State Police as well as the Chesterton Police Department for his actions last night from the original pursuit and this morning.

The handgun that was recovered during the original pursuit on Saturday evening has been determined to be a stolen handgun from Kalamazoo, MI.