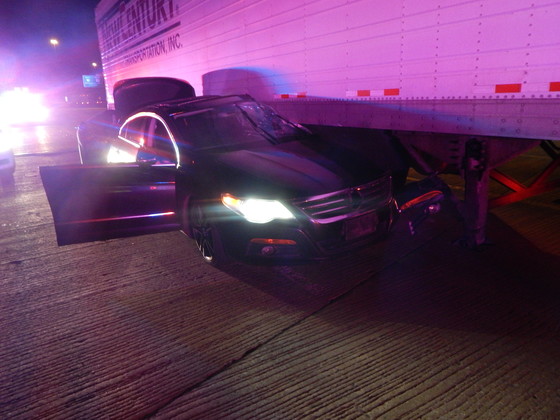 Wednesday morning at 12:45 a.m., Trooper Dennis Griffin was patrolling I-80/94 near Cline Ave. when he observed a black 2010 Volkswagen traveling eastbound at a high rate of speed, according to Sgt. Glen Fifield of The Indiana State Police.

Using the in-car radar, Trp. Griffin checked the Volkswagen’s speed at 96 mph.  The posted speed limit is 55 mph on I-80/94 in this area.  As Trp. Griffin caught up to the vehicle, he was directly behind the vehicle and paced the car at 100 mph as the Volkswagen began to make unsafe lane movements.  A traffic stop was initiated, but the driver failed to stop and accelerated away from the trooper.  A pursuit was initiated as the suspect vehicle exited onto Grant St., reentering I-80, and going back west towards Illinois.  As the pursuit continued, the driver turned off all the lights on the suspect vehicle in what the officer believed was a further attempt to flee.  While traveling without lights, the vehicle crashed into the trailer of a semi that was also traveling westbound.  The two vehicles then stopped near Calumet Ave.  Both occupants of the car were then immediately taken into custody.  Neither the driver of the semi nor the occupants of the Volkswagen were injured as a result of the crash.

Troopers recovered a loaded .45 caliber Glock handgun from the scene and later seized a bag of suspected marijuana from the passenger.

The driver, Aris J. Lawson, 25, from Chicago Heights, IL, and passenger, Kayla J. Davis, 23, from Sauk Village, IL, were transported to the Lake County Jail for booking.  Mr. Lawson is preliminarily charged with the following offenses:

Ms. Davis is preliminarily charged with the following: