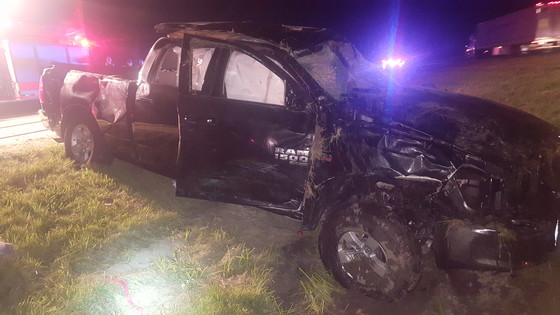 On Saturday August, 15th of 2020 at approximately 12:00 a.m., the Indiana State Police Regional Dispatch Center received a 911 call regarding a multi-vehicle rollover crash on I-65 southbound near the 211.5 mile-marker, according to Sgt. Glen Fifield.  Preliminary investigation by Trooper William Stancy shows that a white 2008 Infiniti EX35 and a black 2020 Dodge Ram were both travelling southbound when for unknown reasons the driver of the Infiniti lost control of their vehicle, sideswiping the Dodge Ram.  The Infiniti then rolled several times in the left lane before coming to a rest, upright, in the median.  The Dodge also rolled several times after being sideswiped and also came to a rest, upright, in the median, Fifield said.

At some point while the Dodge was overturning, a juvenile passenger was ejected from the pickup.  It is believed that he was sleeping in the back seat of the pickup and was not wearing a seatbelt.  The juvenile was initially unresponsive at the scene.  He was flown to Christ Advocate Hospital in Illinois for treatment.  The driver of the Infiniti, identified as Romaris L. Walton, 25, from Berwyn, IL, was transported to Franciscan Health Hospital in Rensselaer for treatment of non-life-threatening injuries.  The driver of the Dodge, Oscar E. Saurez Bracamontes, 25, from Zion, IL, was uninjured and was wearing a seatbelt at the time of the crash.

As this article is being put out at 10:30am, the juvenile is currently being treated at Christ Advocate Hospital in serious condition.   Assisting at the scene were the following: Sgt. Correll, M/Trp. Halliburton, Jasper County Sheriff’s Department, Rensselaer Fire, Jasper County EMS, and Cheever’s Towing.  The crash scene was reconstructed by the Indiana State Police Reconstruction Team including John Landowski and Kurtis Jones.  The interstate had intermittent lane closures for the investigation until 6:30 a.m.

This is an ongoing investigation.  Once it is completed, the findings will be presented to the Jasper County Prosecutor’s Office to determine whether any charges will be filed.