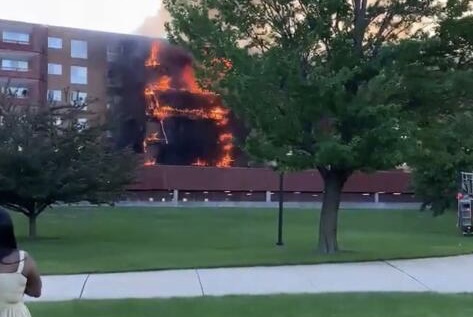 On Monday, May 30, 2022 around 7 PM, a fire started at a condo complex located at 200 Park Ave in Calumet City, according to Calumet City Fire Officials. The fire was escalated to a Three Alarm Fire with numerous departments aiding from across two states.

The fire began on the second floor, eventually climbing to the roof and attic of the building, Calumet City Fire Department said Tuesday. Multiple rescues were made on scene as crews arrived. A woman died from injuries in the fire. She has been identified as 85-year-old Wilhelmina Williamson. Four other residents and three firefighters were transported to nearby hospitals for minor injuries.

The building houses 312 units but the number of families displaced was around 80. The Red Cross was on scene assisting overnight.

The cause of the fire remains under investigation but a press conference is scheduled for this morning with more information.