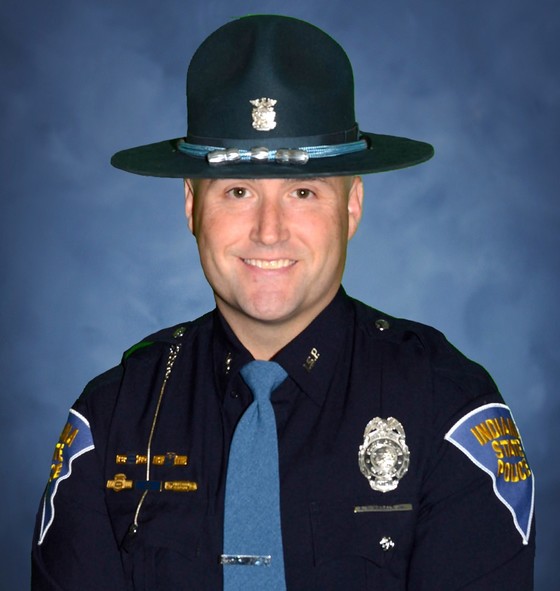 Indiana State Police Superintendent Douglas G. Carter has announced the recipient of the 2021 Indiana State Police Trooper of the Year. This honor is bestowed upon a deserving Trooper that exemplifies the department’s lofty standards and expectations as related to the overall mission. Leadership, productivity, service to the community both on and off duty, and assigned responsibilities are just a few areas taken into consideration when nominated.

The 2021 Indiana State Police Trooper of the Year is Trooper Andrew D. Rasala Jr. Trp. Rasala’s performance and accomplishments during 2021 are worthy of such recognition, having earned him this prestigious award as he is the first trooper assigned to the Lowell Post to receive this accolade. He is also the 2021 Trooper of the District for the Lowell Post.

During 2021, Trp. Rasala was assigned to the day shift at the Lowell Post, specializing as a member of the All Crimes Policing (ACP) Team. Trp. Rasala is a Field Training Officer (FTO), a member of the Mobile Field Force (MFF), and background investigator. In 2021, Trp. Rasala had 1026 traffic contacts, 135 criminal arrests (70 of which were for felony crimes). In addition to regular patrol duties, Trp. Rasala seized over 1200 lbs. of illegal drugs to include cocaine, methamphetamine, crack, ecstasy, heroin, marijuana, and prescription drugs; 25 firearms and more than $340,400 in U.S. currency. Trp. Rasala accomplished all of this while also taking routine calls for assistance including 321 police services and 33 crash reports. The District #1 Law Enforcement Council also recently recognized Trp. Rasala for his exemplary service in 2021.

In his nomination, Trooper Rasala was noted as being a leader by example, acting as an informal leader of the ACP Team. His dedication and initiative are displayed daily. Trp. Rasala is described as routinely receiving positive comments from other troopers as well as the public regarding his work ethic and calm demeanor. Lt. Terry Gose stated “You will not find a harder working trooper anywhere in the state. Trooper Rasala leads by example in everything he does.”

In addition to the duties required by the Indiana State Police while serving the citizens of Indiana, Trp. Rasala also serves his community as a school resource officer for the East Porter County School Corporation. Trp. Rasala takes immense pride in removing dangerous drugs and illegally possessed firearms out of our communities. His passion is to make every interaction with the public a positive encounter, even when the individual may have committed a crime.

Trooper Rasala is a seven-year veteran of the Indiana State Police. He resides in Porter County with his wife Kristina, and their two children.