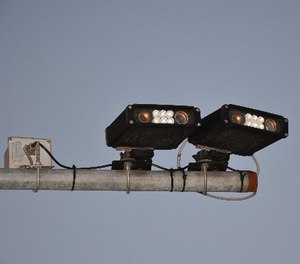 Last year, under the Tamara Clayton Expressway Camera Act, the ISP received a $12.5 million grant for purchase of specialized cameras to read the license plate numbers of vehicles moving in traffic. The installation of automated license plate readers (ALPR), software, and specialized cameras will aid in the investigation of Cook County expressway shootings and vehicular hijackings. ALPR images are transmitted to a central location where they are cross referenced against vehicles wanted in criminal activity.

The cameras are being installed on Chicago area expressways. The first phase of the project has been completed with the installation of 99 cameras on the Dan Ryan Expressway. The ISP continues to work with IDOT and CDOT to assist with the installation of approximately 200 additional license plate reader cameras over the next year. The images from these cameras will not be used for petty offenses, such as speeding.

On January 13, 2022, at approximately 12:01 a.m., an ISP Trooper was alerted to the presence of a vehicle reported to be stolen during an aggravated vehicular hijacking that occurred in Chicago on January 12, 2022. The alert came after ALPR cameras recorded the vehicle traveling on the Dan Ryan Expressway, triggering an alert to law enforcement. An ISP Trooper attempted a traffic stop on Interstate 290 westbound at Sacramento. The suspect vehicle fled onto Interstate 290 eastbound towards downtown Chicago.

ISP Troopers stopped the suspect vehicle in the area of 55th and Michigan Avenue.  Three juvenile suspects exited the vehicle and fled on foot. After a brief foot pursuit, ISP Troopers were able to take all three suspects into custody.

On January 14, 2022, at approximately 12:09 a.m., an ISP Trooper was alerted to the presence of a stolen vehicle wanted for a reported expressway shooting that occurred in Chicago on
January 11, 2022, at approximately 4:27 p.m. The alert came after ALPR cameras recorded the vehicle traveling on the Dan Ryan Expressway, triggering an alert to law enforcement. The ISP Trooper attempted a traffic stop and the vehicle fled. The suspect vehicle crashed into a traffic sign, ending the vehicle pursuit. The suspect exited the vehicle and fled on foot. After a short foot chase, the suspect was taken into custody by a K9 apprehension. Two weapons were recovered from the suspect vehicle.

The ALPR technology is a critical component that ISP is using to respond to “in progress crime” and the ALPR data is now a regular tool in ISP’s arsenal to further investigations related to expressway violence.

In fact, the ALPR system has been crucial in the recent investigations involving violent crimes on our Cook County interstates.  They provide previously missing – information that can now be utilized to assist officers in identifying witness, offenders, and victims of expressway violence.

“These cameras give us the technological edge to pursue leads and identify suspects on the Chicagoexpressways,” said ISP Director Brendan F. Kelly. “As technology advances, so must law enforcement. The ISP will continue to lead from the front. “Let me be clear, criminals who commit serious crimes on the expressways will be caught and held accountable. The ISP are committed to ensuring public safety on the Chicagoland expressways and across the state,” he concluded.

The Tamara Clayton Expressway Camera Act (Expressway Camera Act) was signed into law on July 12, 2019, and became effective on January 1, 2020.  Ms. Clayton was on her way to work on February 4, 2019, when she was tragically shot and killed while driving on Interstate 57 near Cicero Avenue.  ISP investigators responded and the investigation into her death remains open and ongoing.

Please note specifics from expressway shooting investigations related to the ALPR program cannot be released as they are part of on-going criminal investigations.

The ISP continues to urge the public to please contact the ISP (847) 294-4400, if they witness a shooting or have any information, which would assist in this or any investigation. The ISP also encourages the motoring public to try to safely obtain a license plate of vehicles involved in criminal conduct, when possible, and to report any information to the ISP.