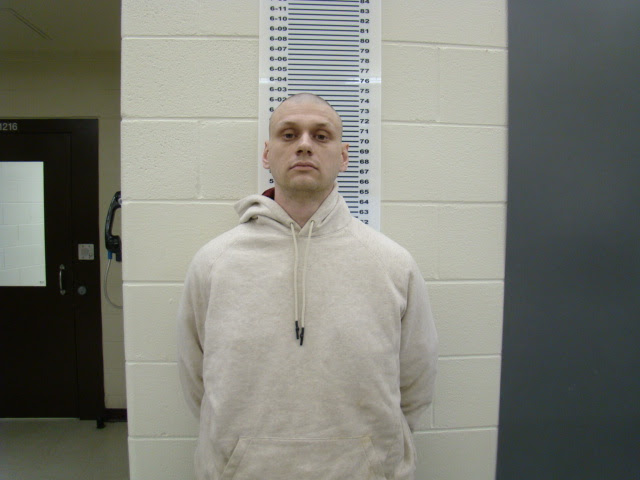 Friday morning at approximately 9:00 a.m., Master Trooper Martin Benner of The Indiana State Police was patrolling I-65 near the 212 mile-marker when he observed a maroon 2015 Chevrolet Equinox driving northbound along the outside shoulder.  The vehicle was driving with a flat front tire.  M/Trp. Benner proceeded to follow the vehicle, providing emergency light support as he believed the driver was attempting to make it to a safe location to change the tire.  As the vehicle approached the exit ramp to Rensselaer, the driver made an erratic lane change, driving in the lane of travel and not on the shoulder.  M/Trp. Benner initiated a traffic stop, curbing the vehicle on the ramp at exit 215.

As M/Trp. Benner was speaking to the driver, the driver requested additional officers as well as medics to be dispatched to the scene.  The driver then rolled the window up as he was displaying his identification to the trooper.  As additional troopers arrived, a knife was observed in the driver’s possession.  The driver continued to make threats of harming himself, resulting in a hostage negotiator being contacted.

As the negotiations with the subject broke down, entry into the vehicle was made by officers and the subject was taken into custody without harming himself or any officers.  The suspect was transported to a local hospital where he was medically cleared and later processed for booking at the Jasper County Jail.  It was determined that the vehicle was reportedly stolen in Michigan, the result of a carjacking in Huron County.  Additional crimes were also to have taken place in Michigan in Muskegon and Mason Counties.

The suspect has been identified as Carl A. Rienhold, 26, from Fountain, MI.  He is being held at the Jasper County Jail for warrants to be filed in Michigan and extradition back to that state.  He is preliminarily charged in Jasper County with the following offenses:

All persons named in this release are presumed innocent until and unless proven guilty in court. All charges mentioned are merely accusations, actual charges will be determined by the Jasper County Prosecutor’s Office.