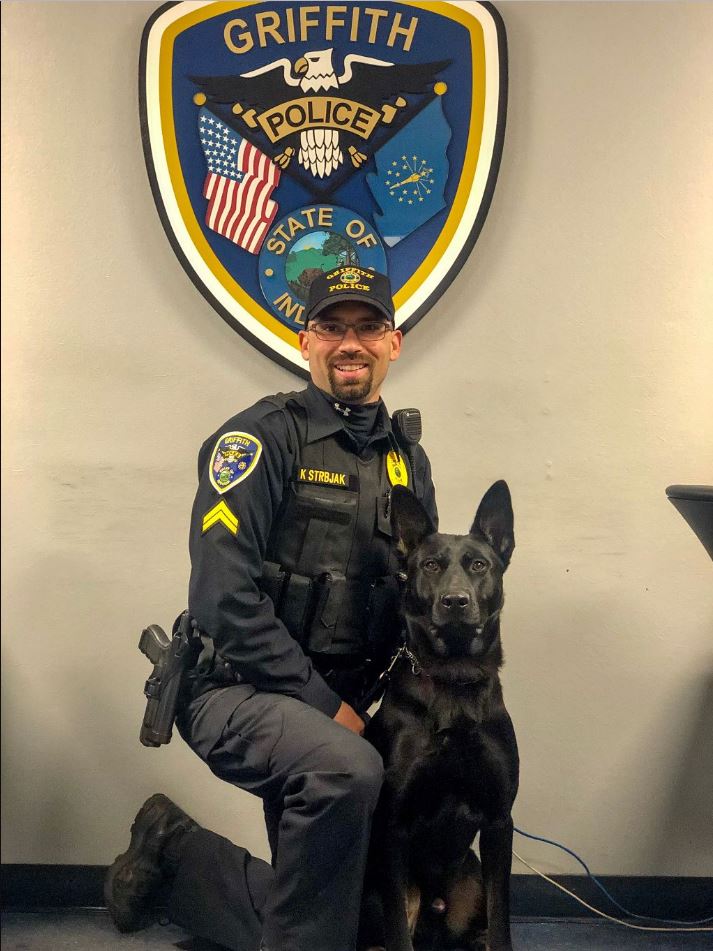 On Friday night, December 20th, the second K-9 of the Griffith Police K-9 Program will hit the streets.  Cpl Kevin Strbjak and his new K-9 partner “Deno” have been in intensive training for several weeks and are putting that training to work while patrolling the town of Griffith.  Deno will work different shifts than his senior K-9 “Gino”, doubling the K-9 capabilities of the Griffith Police Department.  The rhyming names of the 2 dogs is pure coincidence given that they were purchased years apart and already named when turned over to Griffith Police handlers.

Deno was born in the Czech Republic and is a 1 ½ year old German Shepherd.  He was purchased from International K-9 College out of West Palm Beach, Florida.  He underwent months of training before turned over to Cpl Strbjak in Florida.  The two then started their initial K-9 handler’s course training for 1 week before returning to Deno’s new home in Griffith.  Cpl Strbjak and Deno have since been in training for the past 7 weeks based out of Hobart Police Department.  This training included narcotic detection, tracking operations, aggression control and other police related disciplines.

Deno was purchased, in part, with Griffith Police funds specifically designated for the purchase, but also through generous donors.  Austgen Properties in Griffith donated $2,500.00, The Griffith Lions Club gave $700.00, and Centier Bank in Griffith supported the cause with another $300.00 while numerous other groups and individuals also already assisted with the purchase.  The Griffith Police are also thankful for the commitments of Canadian National Railroad for $5,000.00 and United Federal Credit Union in Griffith for $1,105.00.

Cpl Strbjak and Deno will share the K-9 duties with the already successful veteran K-9 team of Ofc Gutierrez and Gino.  The Griffith Police Department would like to thank everyone responsible for making this addition to the program possible as we know both K-9’s are expected to make a big impact; and are a welcome resource to augment policing in Griffith.