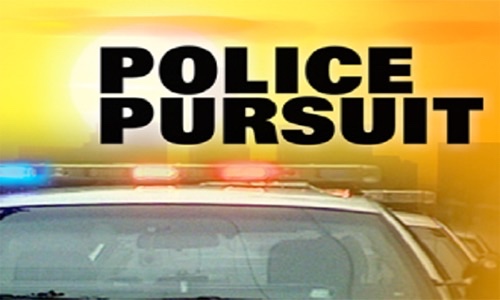 The Impala eventually stopped near 4th & Roosevelt, but when officers approached and ordered the driver to roll down the windows of the vehicle, he refused and drove away at a high rate of speed.  The vehicle stopped at a snowbank near 8th and Taft, and the occupants left the vehicle. A Lake County Sheriff’s Department officer deployed his K-9; tracking a suspect to a dark area covered by heavy brush.  When the officer approached, the K-9 was on top of the suspect and the suspect was pointing an object at the officer.  The officer commanded the K-9 to apprehend the suspect.  The K-9 was able to contain the suspect; which was critical to assisting the officer in effecting the arrest.  The object the suspect was pointing was later identified as a cell phone, The Sheriff’s Office said.

The suspect, a 31-year-old male from Gary, was arrested and taken to Methodist Northlake Hospital where he was evaluated, treated and released before being booked into the Lake County Jail.

Officers recovered a loaded handgun from the vehicle the suspect abandoned.  He faces charges including felon in possession of a firearm and theft.