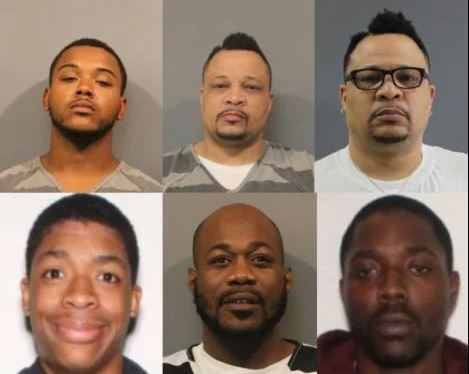 The U.S. Marshals are seeking the public’s help in locating five violent fugitives wanted by the Lake County Sheriff’s Office on multiple charges, including murder, kidnapping and rape, and are offering up to $5,000 for information leading directly to their arrest.

Aaron Sawyer, 24, aka “Woo” and “Arrin Buggs,” is wanted by the Lake County Sheriff’s Department for murder which occurred on May 31, 2020. Sawyer is African American, standing a 5 feet 11 inches and weighing approximately 200 pounds with a dark complexion and medium length hair that may be worn in four-inch twists. He has a tattoo of a flaming skull on his left hand/fingers and a tattoo across his chest with the numbers “1997.” Sawyer has family and close friends in Gary, Merrillville, Indianapolis, and Fort Wayne, Indiana.

Roy Akins Jr., 19, is wanted by the LCSO for murder which occurred on August 22, 2020. Akins is 6-feet and weighs approximately 165 pounds. He is an African American male with a medium to light complexion. Akins may have long hair braids or twists. He is known to be an aspiring music artist. He has family and close friends in Gary and Merrillville, Indiana, and St. Louis, Missouri.

Tomecko Johnson, aka Kenneth/Keith Johnson, 45, is wanted by the LCSO for murder which occurred on July 8, 2020. Johnson is an African American male with a dark complexion, stands 5 feet 8 inches and weighs between 170 and 190 pounds. He is bald and has various tattoos on both arms and chest. Johnson has a gold tooth, a scar on the center of his forehead, and flat/non curved ears. He has close ties to Gary and Merrillville, Indiana.

Shavesz Johnson, 25, is wanted by the LCSO for murder, which occurred on March 2, 2021. Johnson is African American, stands 5 feet 9 inches and weighs approximately 200 pounds. He has a medium complexion and short hair. Johnson has the word “Loyalty” tattooed on his left arm and the name “Rose Renee” tattooed on his right. He has a mark under the left eye and a mark on the right cheek. He is known to frequent various hotels on the Indiana and Illinois border. Johnson has close ties to East Chicago, Hammond and Gary, Indiana, and New Ulm, Minnesota.

Montrelle Dubose, 52, is wanted by the LCSO for failure to appear for sentencing for rape. Dubose was sentenced in absentia to 120 years in prison. Dubose is an African America male standing 6 feet and weighing approximately 225 pounds. He has a light complexion and short hair. Dubose has a picture of his mother tattooed on his chest, the name “Sophia” on his left arm and “Mom” on his right arm. He is known to wear thick framed glasses. Dubose is known to use his brother’s name Rodney. Dubose has close contacts in Gary, Griffith, Evansville, and Indianapolis, Indiana.

Anyone with information should contact the nearest U.S. Marshals office, the U.S. Marshals Service Communications Center at 1-877-WANTED-2, (1-877-926-8332) or online via the web or an app at www.usmarshals.gov/tips.