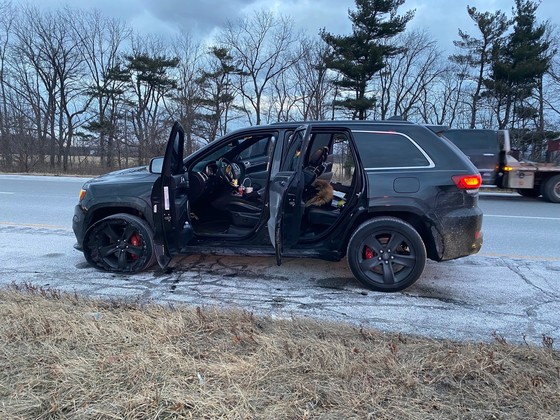 On Thursday afternoon at approximately 4:15 p.m., Indiana State Police Trooper Pratt along with Trooper Fuertes were patrolling in Michigan City when they observed a black Jeep Grand Cherokee SRT with Illinois plates, according to Sgt. Glen Fifield.  A check of the license plate attached to the Jeep returned to a different vehicle.  As the trooper attempted to follow the vehicle, the driver of the Jeep suddenly accelerated away at a high rate of speed.

A pursuit was initiated as the vehicle fled south on Franklin St. before entering I-94 westbound.  The Jeep exited I-94 and drove southbound on SR 49 to I-90 (Indiana Toll Road).  As the vehicle was attempting to enter the Toll Road, it struck “stop sticks” that had been placed across the roadway, Fifield said.  The Jeep continued to flee westbound on I-90, driving on a flat tire.  The driver eventually stopped at the 27 mile-marker where he and a male passenger were taken into custody without further incident.

During the subsequent investigation, it was determined that the Jeep had been reported stolen in Plainfield, Illinois via a Facebook sales scam.  The driver of the Jeep matched the description of the suspect in that scam.  Troopers also learned that this was not the driver’s first time fleeing from law enforcement while using a vehicle.

The passenger was released and not charged.  The driver, identified as Keyvon Johnson, 23, from Park Forest, IL, was transported to the LaPorte County Jail.  He is preliminarily charged in Indiana with the following offenses:

All persons named are presumed innocent until and unless proven guilty in court.  All charges mentioned are merely accusations, actual charges will be determined by the LaPorte County Prosecutor’s Office.