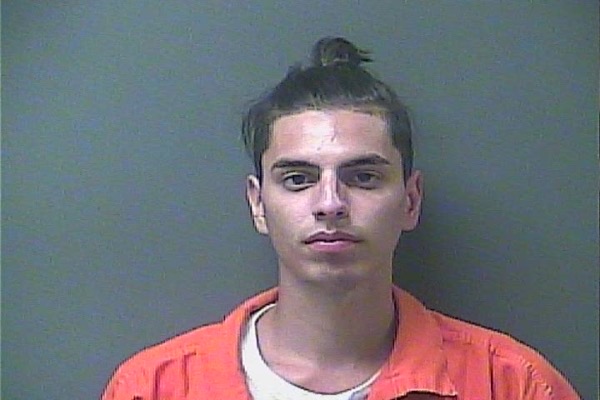 An arrest has been made in the July 4th shooting death investigation of Antonio Rivera, according to Michigan City Police. Over the past 2 weeks since this unfortunate incident, Detective Arwen LaMotte and several other Detectives of the Michigan City Police Department have been following up on leads and reviewing surveillance video from several citizens in the neighborhood that had home security and/or Ring doorbell cameras.

During the course of this investigation, it was learned that RIVERA had gotten into an altercation in the Stop 2 parking lot during the evening hours of July 4th. This altercation led to a female being pushed to the ground and injuring her ankle, Police said. The injured female soon noticed that her cellphone and car keys were missing. The injured female and her friends then began tracking her phone and learned that Rivera was in possession of the property.

When Rivera arrived at Lake Hills School to return the property, he was in possession of a firearm, and subsequently fired his weapon. Rivera fled the area and was chased by Vigil who was the lone occupant of his vehicle, a black Hyundai Sonata. Shots were fired by Vigil in the area of Washington Park Boulevard and Liberty Trail where Rivera was fatally wounded and subsequently crashed his vehicle into a business in the area of Liberty Trail and US 12, Police stated.

On July 15th, 2020, Detective Arwen LaMotte, with the assistance of La Porte County Prosecutor John Lake and Deputy Prosecutor Elizabeth Boehm, obtained an arrest warrant on Zachariah Colton Vigil for Murder. Upon obtaining the arrest warrant, it was learned through the course of the investigation that Vigil was currently in the area of Lake James near Angola, Indiana, approximately 2 hours east of La Porte County.

Detectives traveled to the area and within hours, Vigil was located operating a jet ski on Lake James. Vigil was escorted to shore and placed under arrest on the active Murder warrant with the assistance of Conservation Officers from the Indiana Department of Natural Resources.

Vigil was transported to the La Porte County Jail where he is being held on a $1Million CASH ONLY bond.

Chief Dion T. Campbell stated, “Detective LaMotte, as well as many others are to be commended for their efforts in thoroughly investigating and apprehending this dangerous murder suspect. Many sacrificed their 4th of July holiday and countless hours leading up to this arrest to assure that the residents of Michigan City and La Porte County remain safe. I am very proud of the Michigan City Police Department and sincerely appreciate the assistance from the cooperating agencies that worked together to bring this case to a safe conclusion.”

The Michigan City Police Department would ask anyone with information or surveillance cameras (such as Ring Doorbell Cameras) in the area of the 200 Block of Lake Hills Road and surrounding neighborhood to contact, Detective Arwen LaMotte at 219-874-3221 Ext: 1081.

We would also like to remind the public that you can contact via Facebook Messenger, through the crime tip hotline number of 219-873-1488, or you can also call the WeTip Hotline for General Crime (800) 78-CRIME and possibly receive a reward upon an arrest and conviction. All WeTip call information is sent directly to the LaPorte County Prosecutor’s Office. You can always request to remain anonymous!