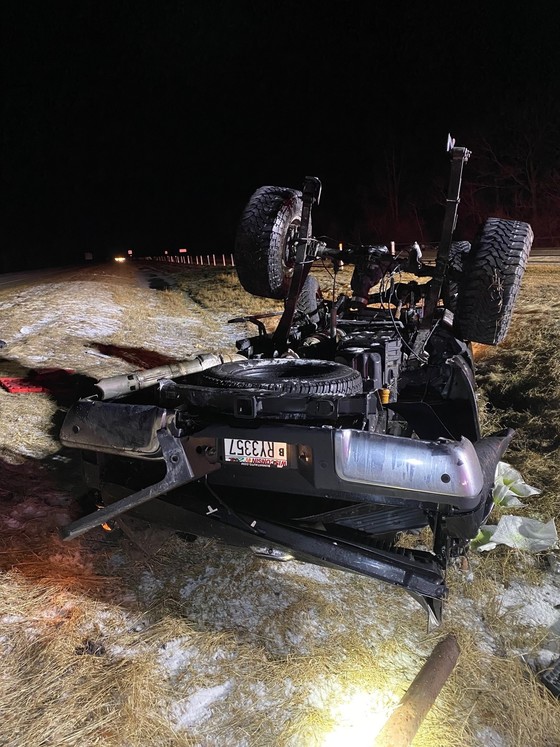 On Friday, February 25, 2022 at approximately 10:45 PM, Indiana State Troopers responded to an injury crash on I-65, southbound lanes, at the 229 mile-marker just south of Demotte, according to Sgt. Glen Fifield.

Trooper Rosillo and Trooper Bilthuis located a black, Ford F250 in the median with the driver trapped inside.  A silver Toyota passenger car was located in the right ditch with severe front-end-damage.  The Ford had rolled over coming to a stop on its roof.  The driver sustained serious injuries and needed to be extricated from the vehicle, Fifield said.  He was later transported to Franciscan Hospital in Crown Point for treatment of serious injuries.

Preliminary investigation shows that the Toyota rear-ended the Ford at a high rate of speed, causing the truck to roll and the subsequent damage to the Toyota.

During the investigation, troopers observed the front passenger door fully opened and they were unable to locate the driver or any passengers.  Further investigation at the scene led troopers to believe there had been two occupants in the Toyota.  A handgun, as well as illegal drugs, were also located inside the vehicle.  Troopers continued to investigate and located footprints leading away from the Toyota to the west of I-65.  A K9 unit was contacted to assist with a search, as well as the Lake County Sheriff’s Department Aviation Unit.  During this time, the interstate lanes were restricted for crash reconstruction and scene cleanup.

Approximately 45 minutes after the crash, a Newton County Sheriff’s Deputy located a female subject walking on County Line Road and 700 North in Newton County.  The female was covered in glass and had injuries consistent with being involved in a vehicle crash.  However, the female was uncooperative and gave inconsistent statements to the deputy as to how she was from Illinois and wound up walking on that road.  An ambulance responded to the scene, but she refused treatment.  Additional officers responded to the area and located a second set of shoeprints that were different from the female’s leading south.  A Jasper County K9 tracked the footprints back to the scene of the crash.  Officers continued to search the area and were able to track the shoeprints along ditches, fields, and wooded areas.  At one point during the search, officers located shoes in the snow and footprints, not shoe prints, leading them to believe the suspect was barefoot.

After tracking the prints for approximately four hours and over seven miles, officers located a male suspect laying face down in a ditch one mile north of S.R. 14 on County Line Rd.  The suspect was found barefoot with wet clothes.  He was unresponsive to verbal commands and appeared to be suffering the effects of being exposed to 20-degree temperatures.  Officers were able to pull him out of the ditch and located a faint pulse.  The officers immediately rendered first aid, removing the wet clothes from the subject, and wrapping him in blankets before laying him in the back seat of a police car.  An ambulance responded and transported the subject to Franciscan Health Hospital in Crown Point, IN.  He was treated for potential life-threatening injuries because of the cold exposure.

The female subject has been identified as Tiara C. Lloyd, 32, from Chicago, IL.  She was transported to the Jasper County Jail and is charged with the following:

The male subject has been identified as Diamen D. Melton, 33, from Lafayette, IN.  He is preliminarily charged with the following:

All charges listed are accusations.  Final charges to be determined by the Jasper County Prosecutor.  All suspects are presumed innocent until/unless proven guilty in court.

The Indiana State Police are appreciative of the efforts put forth by all of the assisting agencies in locating the suspects in this investigation.  Assisting at the scene were the following:  Lake County Aviation, Jasper County Sheriff’s Department, Newton County Sheriff’s Department, Keener Township Fire, Rensselaer Fire, Demotte Fire, Phoenix EMS, Village Motors, and the Indiana State Police Crash Reconstruction Team.